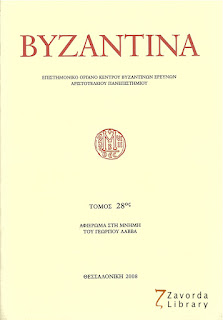 Văleva Tsveta,
«Sur la question sur la soit-dite „Ėcole artistique de Kastoria”», Βυζαντινά 28 (2008), p. 181-221.
Thessalonique 2008
PDF
Λέξεις κλειδιά: Καστοριά, Σχολή Καστοριάς, Τέχνη, Ζωγραφική
Keywords: Kastoria, School of Kastoria, Art, Painting
Văleva Tsveta
Towards the Issue of the So-called “Kastoria Art School”
Summary
The article represents an attempt of summarizing the current state of the researches and delineating the main problems of the Balkan monuments, dating from the last quarter of XV to the first third of XVI century, connected to Kastoria as an art center. They form rather big group, including 54 works of monumental painting and icon painting, having common thematic, iconographic and stylistic peculiarities. Some of them, as for example The Old Catholicon of the Monastery of the Great Meteoron and the nun Eupraksia’s church of St. Nicolas in Kastoria, are present in the scientific literature for a long time. Others like the Church of St. Paraskevi in Braychino village (FYROM), the Church of Sts Peter and Paul and the Church of St. Athanasios (both in Aiginio, Pieria), are almost unexplored. The current research poses on the first place the key unsolved terminological problem “Kastoria art school” – “Kastoria atelier/ateliers” – “international Balkan style”. The research offers a new sight towards this question and emphasizes the lack of clearness on a number of problems, amongst which those for the delimitation between masters, apprentices and imitators; the problem for the origination, the time and territorial borderlines of this leading for XV century on the Balkans “trend”; for its connections with the Ochrid art school. In the research the concept of “Kastoria art production” is introduced, which is descriptive and conditional, but it corresponds to the current state of researches on the monuments in hand. Since there is no thorough, generalizing research on this art circle, the article includes the monuments, which are up to now incorporated in it by different Balkan authors. The monuments are represented in a few groups according to the chronology of their creation and the style differences between them. These are mural paintings and icons dating from the 80-es and 90-es of XV century, from Veria, from Moldavia and from the first three decades of the XVI century. In a separate group a few “disputable” monuments are represented, for which the researchers express irreconcilably controversial opinions. Undoubtedly the authors of all these works were members of itinerant ateliers, and were working in a vast geographical area: Northern Greece, FYROM, South-East Albania, Western Bulgaria, Eastern Serbia, Moldavia in Romania. Amongst a number of centers of regional importance in XV century, Kastoria is one of the few, which exercised global influence on Balkan post-Byzantine art. Thematic peculiarities of Kastoria art production are detailed development of the cycle of The Passion of The Christ; preference for saints with a cult, concentrated in the territory of the Ochrid archbishopric; representations of images on hymnographic works. Main thematic emphasis and basic iconographic peculiarity is the composition of The Deesis with the crowned Christ and the warrior–saints in court dressing. Other iconographic signs of the monuments in hand can be discovered in the image of the Virgin Mary, named Μεγάλη Πανάγια, in the composition of The Vision of St. Peter of Alexandria, in a number of details in the scenes from the Gospel cycle, etc. These characteristics are more stable than the style of the works of Kastoria art production, in which at least four more common lines can be distinguished. The main trend in the style and iconography of these works is the preservation of the models from XIV century, not as an imitation, but interpreted in connection with the new historical and artistic context and expressed by new artistic means. These qualities assign them a boundary and mediation place in post-Byzantine Balkan art. On the other hand the Kastoria masters and their followers are open to new searches and enrichment of the iconographic and thematic repertoire. That’s why they are traditionalists as well as innovators in the different aspects of their art.
στις Ιουλίου 30, 2021