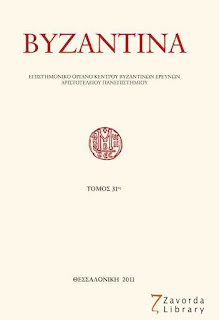 Τσιλιπάκου Αγαθονίκη,
«Ο κύκλος του Ακαθίστου στο καθολικό της Ι. Μ. Κοίμησης Σπηλαίου Γρεβενών», Βυζαντινά 31 (2011), σ. 217-278.
Θεσσαλονίκη 2011
PDF
Λέξεις κλειδιά: Ακάθιστος Ύμνος, Τοιχογραφίες, Τέχνη, Γρεβενά
Keywords: Akathistos Hymn, Wall-painting, Art, Grevena
Summary
Tsilipakou Agathoniki, The Akathistos in the Catholicon of Dοrmition at Spilaio at Grevena: Contribution in the Work of the Painters Michalis and Hlias and in the Iconography of the Cycle
The historic monastery of the Dormition is situated at the northeastern entry of the village Spilaio at Grevena region. The catholicon is built in 1633. The major part of the main nave and the narthex are painted in 1658 by the agiographers Michalis from Zerma at Hipirus and Hilias from Eptachori at Kastoria. Ιn the narthex, on the upper surfaces of the costal arcades are depicted the hoikoi 1 – 22 of the Akathistos Hymn. After the iconographic analysis and the hermeneutic approach of the scenes about the work of the two painters we could presume as follows:
We characterize their work as an eclectic one, that is typical for the artistic production in the 17th century, mainly at the region, far away from the great monastic centres. In their compositions they combine elements from the older and immediate previous tradition of the northwestern Greek area, and generally of the major Macedonia with special emphasis in the palaeologean and serbian iconography and that of Kastoria, former and modern. The special similarities in details and general synthetic forms with the parallel representations in Perivleptos at Ohrid, in Dečani, in Matejiča, in Markov monastery and mainly in Panagia Apostolaki and Panagia Mouseviki at Kastoria (hoikoi 1, 4, 6, 7, 8, 10, 11, 13, 14) speak for the higher ascertainment. On the other side there are few influences of the achievements of the two «great» schools, the cretan and the local continental one, in details that go back to the palaeologean iconography and in general synthetic forms.
The special emphasis that is given through selected iconographic types and details in the dogma of the Incarnated Word, in the Salvation of the Humanity and consequently in the role of Panagia as Theotokos and Mediatrix with farther purpose the Release, justifies the glorifying character of the Akathistos Hymn.
The presentation of the hoikoi of the Akathistos Hymn in the catholicon of the monastery of Dormition at Spilaio demonstrates for one more time about the respect in the tradition and also the iconographic variety that can be noticed during the post- byzantine period.
στις Αυγούστου 30, 2021