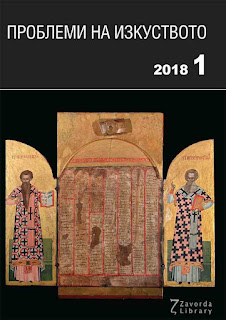 Кунева Цвета,
«Към въпроса за хронологичните и териториални рамки на костурския художествен къг от XV-XVI век», Проблеми на искуството 2018,1 (2018), с. 25-35.
София 2018
PDF
Λέξεις κλειδιά: Καστοριά, Ζωγραφική, Καστοριανή Σχολή, 15ος, 16ος αιώνας, Τέχνη
Keywords: Kastoria, Painting, Kastoria School, 15th, 16th centuries, Art
Summary
The subject of the publication – the works of the Kastoria artistic circle of 15th-16th centuries – has been analyzed as an important phenomenon in the cultural life of the period by the Balkan art historians from the 1970s on. Despite that the problems posed by these monuments are still not fully clarified. After the field studies carried in a number of Balkan painting works under the project of the Institute of Art Studies at the Bulgarian Academy of Sciences „The Roads of Balkan Painters and Post-Byzantine Artistic Heritage in Bulgaria” and on the basis of the new scientific publications on the monuments under consideration we pose one of the principal questions on the topic: the question of the chronological and territorial limits of the Kastoria artistic production of 15th-16th c. It has been only sketched in the literature to date. This study is an attempt to arrange the dozens of monuments of the Kastoria artistic circle of 15th-16th centuries into groups conditionally separated depending on their chronology and similarities between one another. By this arrangement we get to the conclusion that the work of the Kastoria studios of the period is almost exclusively within the limits of the historical area of Macedonia and the last two decades of the 15th century and the first thirty years of the 16th century. The earliest dated works, i.e. the Old Katholikon of the Great Meteoron and parts of the murals in Saint Nicetas near Čučer [Banjane] date from 1483/4, and the latest work, i.e. the Church of St. Saviour (Sveti Spas) in the Chebren monastery was created in 1532/3. In the 16th century, a number of painting teams were formed by Kastoria masters’ students and heirs. Subsequently, the influence of the patterns imposed by the Kastoria artistic production was strong as late as the end of the 17th century all over the Balkan Peninsula.
στις Σεπτεμβρίου 05, 2021