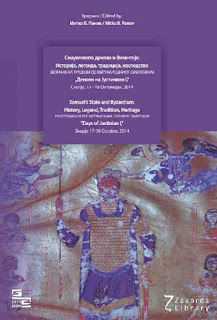 Чаловска Емилија Апостоловска,
«Турскиот мимбар и прашањето за реконструкцијата на првобитниот мобилијар на црквата Св. Софија во Охрид», Samuel’s State and Byzantium: History, Legen, Tradition, Heritage. Proceedings оf the International Symposium “Days of Justinian I,” Skopje, 17-18 October, 2014, с. 173-187.
Skopje 2015
PDF
Summary
St. Sophia, cathedral of the Ohrid archbishopric, undoubtedly one of the most significant medieval monuments in Macedonia, is a master-piece of byzantine architecture, fresco-painting and architectural decoration. During its millennial existence, its function often succumbed to change in reference to the political and social circumstances, which inevitably led to changes in its external and internal appearance. The most important change occurred during the Ottoman reign, when it was converted into a mosque: the domes in the naos and narthex were replaced by simple vaulting and the frescodecoration white-washed. The richly decorated marble sculpture dating from the XI-XIV century, such as the ambo, the chancel-screen and archbishop Gregorius I’s throne, was dismantled and re-utilized as spoliae in subsequent repairs and transformed into a new kind of artistic expression: the mimbar of the mosque of Aya Sophia. This paper aims to shed a light on the construction, composition and other characteristics of the mimbar, as well as on its current state and future prospects after the monument was reclaimed by the Orthodox Church in 1991 and the subsequent attempts for reconstruction of the altar chancel screen.
στις Νοεμβρίου 22, 2021