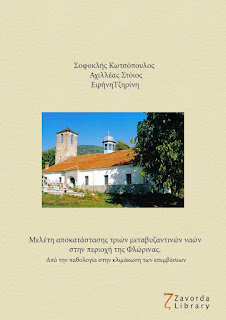 Κωτσόπουλος Σοφοκλής – Στόιος Αχιλλεάς – Τζηρίνη Ειρήνη,
«Μελέτη αποκατάστασης τριών Μεταβυζαντινών ναών στην περιοχή της Φλώρινας. Από την παθολογία στην κλιμάκωση των επεμβάσεων», 4ο Πανελλήνιο Συνέδριο Αναστηλώσεων, 26-28 Νοεμβρίου, Θεσσαλονίκη. Πρακτικά.
PDF
Summary
Kotsopoulos Sofoklis – Stoios Achilleas – Tzirini Eirini,  Restoration project of three post-Byzantine churches in Florina region. From pathology to the gradation of interventions
The present study refers to the restoration of three post-Byzantine temples in Florina. The monuments under study constitute a worthy example of the architecture and iconography of the post-byzantine period in the area, while they share many common elements, for which reason they were chosen to make up one study in restoration, quite because it was considered that they comprise a group of monuments. The church of Saint Nicolas in Kratero (1836) is a typical three-aisled basilica. The nave constitutes the initial phase of construction, while in further construction phases the gallery, the stone bell tower, the south-facing narthex and the north-facing buttresses were added. More recent intense interventions which were completed in the church over the past few decades caused key structural and architectural damage, altering quite radically the appearance of the monument and its authenticity. St. Demetrius in Parori (1837) is an example of a single-aisled vaulted church. In a later phase the vestibule was built, the north side of which is built of wood in the shape of a loggia, while the west-facing narthex holds the special square plan, wooden campanile. Certain newer interventions partly altered its form, but the most significant alterations were caused by damp inside the church, all of which have contributed to this critical condition. The church of the Birth of the Nativity of the Virgin Mary in Kato Klines (1838) is a retrospective wooden roof temple, whose east face ends in a semicircular apse. The interior boasts a typical wooden dividing wall outside the inner temple in fancy woodwork, to create a type of narthex, above which is located the matroneum gallery. Further small alterations were later made to the church, despite which it is still in quite good condition, because it has not undergone extensive modern interventions; even so, with the passing of time, morphological changes have taken place. Architectural restoration and the enhancement of temples are the purpose of the present study. The objective of the restoration project is to restore the original form of monuments while preserving their most significant construction phases, and if they are of archaeological importance, to do this without affecting the overall character of the church. The proposals submitted, apart from the theoretical and scientific excellence which they purport to offer, take into account both the functional and the construction factors of that time.
Suggestions for the church of Kratero are to clean its façade and to remove exterior coatings and
decorative stone, re-grout the stone and clean the plinths of the narthex. It is also proposed to replace the metal dome with a new wooden one with a metal cover, as can be seen in older photographs. At the same time, an examination of the damaged columns is done, reconstruction of the stone floor and new ducts in the heating system is to install. For the Temple of Klines, the proposed interventions are of a saving nature, like the conservation of its outer coating, the fastening of it and recovery of destroyed parts, cleaning of the wood with the correct chemicals and sectional repair. From the above and with a comparative investigation of these three interventions, we can clearly see that the degree of alterations caused the correspondingly extensive reconstruction works.
στις Ιανουαρίου 11, 2022