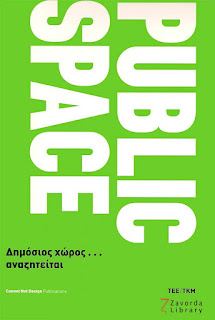 Κωτσόπουλος Σοφοκλής – Τζηρίνη Ειρήνη – Τσοπάνου-Κωτσοπούλου Ευθαλία,
«Ιστορικό κέντρο Φλώρινας και εγκαταλελειμμένα μνημειακά τοπόσημα στο ποτάμι. Ανάγνωση και επναπροσδιορισμός μνημείων και δημόσιου χώρου», στο: Δημόσιος χώρος ... αναζητείται, Συνέδριο, 20-22 Οκτωβρίου 2011, Θεσσαλονίκη.
Θεσσαλονίκη 2011
PDF
Summary
The purpose of this study is to introduce a proposal for the urban rehabilitation of the historical centerin Florina. In addition, an architectural intervention to the riversides is presented. Nowadays, this city doesn't seem to have been built according to a town plan, but to private initiative. This situation depicts the tack of scant regard to the monuments and to the public places, as well. The area, which has been studied, is determined by two of the most important but abandoned monuments of the city. These are the Ottoman Tower - Kule and the Macedonian House where the Muslim Mayor was kidnapped from the Greek rebel Naumis (image 4). Between these monuments there are not only houses constructed according to the traditional Macedonian and Eclectic architecture, but also modern and huge apartment buildings. The construction of the apartment buildings among the monuments tends to overwhelm not only the area to be focused, but the whole city (image 11. Our suggestion is the construction of a bridge that would connect these two historical monuments (image 51. The modern construction has been thoroughly designed to be congruous with the historical setting. Additionally, it includes a set of floor lamps that illuminates these monuments and that gives prominence to the intervention. The whole area is recommended to turn into a community center, where artists can express themselves and provide entertainment for the people. Free cast showrooms around the monuments and recitals on the bridge promote the ideal combination between the public space and the monuments. Simultaneously, the incorporation of the museum of the Macedonian Battle to the second monument and the establishment of a restaurant in front of the Kule enhance the relationship and the consistency among the various public activities and the historical tissue. In addition. from an urban planning perspective. it is strongly recommended that the face of the historical buildings should be restored, the face of modern buildings should be reconstructed and the institution of the urban planning should determine the characteristics and the location of the modern buildings. Consequently, the purpose of our study is the extension of public places into the historical places of the city with respect to the monuments. This idea involves the utilization of additional space in the city and it is more important that our suggestion focuses on developing public life among monuments. In this way, our past will constitute the core of the modern life.
στις Ιανουαρίου 11, 2022