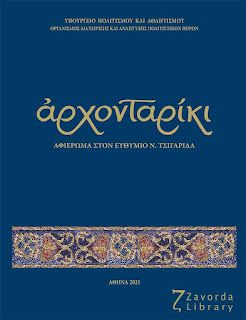 Παπαδημητρίου Παρασκευή,
«Το γραπτό τέμπλο του ναού του Αγίου Γεωργίου του Βουνού στην Καστοριά (μέσα 16ου αιώνα)», στο: Αρχονταρίκι. Αφιέρωμα στον Ευθύμιο Ν. Τσιγαρίδα, σ. 415-428.
Αθήνα 2021
PDF
Λέξεις κλειδιά: Καστοριά, Άγιος Γεώργιος του Βουνού, Τέμπλο, Ζωγραφική, Τέχνη
Keywords: Iconostasis, Art, Kastoria, St George tou Vounou (at the Mountain), Painting
Summary
Papadimitriou Paraskevi Ch., The Wooden, Painted Iconostasis in the Church of Saint George (Vounou) in Kastoria
To professor Tsigaridas I owe my preoccupation with the wooden painted iconostases of Kastoria. One of the oldest is the wooden painted iconostasis in the church of Saint George (Vounou) (Fig. 1-7).
This iconostasis is mainly organized into three zones. The lower zone consists of wooden panels, which are covered with painting decoration with sprouted stems, from where pinkish lobes develop, creating krinanthema (flower lilies). The decoration is painted on a deep blue background (Fig. 2). In the middle zone, the despotic icons were placed, which have been removed and their position remains empty. The openings of the prothesis and the Holy Gate are crowned with ogee arcs. The decoration of the lintel of the Holy Gate is completed, left and right, with illustrations of the prophets David and Solomon (Fig. 4). In the upper third zone epistyle icons are placed with images of the Great Deesis (Apostolic). A particular feature of the iconostasis is the narrow plank, above the Great Deesis, where an inscription of David’s psalm 25΄ is developed (Fig. 5). The cornice that is crowning the iconostasis is also a special element of it, as it consists of two wooden, staggered planks, which are supported by elaborate colored dentils (Fig. 6). It should be noted, that the wooden lining of the roof is similarly decorated with the iconostasis panels (Fig. 7). A similar structure, morphology, construction technique and decoration are found in at least three other iconostases in churches of Kastoria, these of St. Apostles Peter and Paul (Parish of Eleoussis) (Fig. 8), of Panagia Rasiotissa (Parish of Serbiotes) (Fig. 9) and of Panagia (Parish of Saints Anargyrs) (Fig. 10). Their similarities with the iconostasis of the church of St. George are evident and refer to a joint workshop, which was active after the middle of the 16th century. It seems to be the work of a local workshop, which is preferred by the painters or sponsors of the above churches. This is natural, as the effect of the iconostases reveals both manufacturers with original ideas, and also skilled artists who are familiar with the tradition of the city, and at the same time capable of appropriating the new trends of their time.
στις Αυγούστου 30, 2021