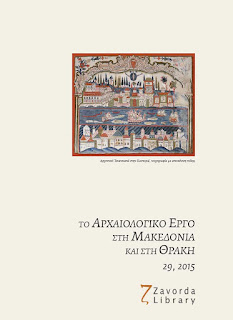 Σαρρηγιαννίδου Χαρά,
«Παρατηρήσεις στον ζωγραφικό διάκοσμο του αρχοντικού Τσιατσιαπά Καστοριάς», ΑΕΜΘ 29 (2015), σ. 21-30.
Θεσσαλονίκη 2020
PDF
Λέξεις κλειδιά: Λαϊκή Τέχνη, Καστοριά, Αρχοντικά, Τσιατσιαπάς, Διακόσμηση
Keywords: Folk Art, Kastoria, Tsiatsiapas, Mansions,
Summary
Sarrigiannidou Chara, Observations on the Painted Decoration of the Tsiatsiapa Mansion in Kastoria
The Tsiatsiapa mansion is located in the north part of Kastoria in the Apozari quarter. It is an exceptional case of 18th-century urban architecture of the city. The project “Restoration of the Frescoes and Wooden Structures of the Tsiatsiapa Mansion” became integrated in the 2007-2013 Operational Programme of Macedonia & Thrace. Works started in 2012 and were completed in 2015 under the supervision of the Ephorate of Antiquities of Kastoria. This paper presents the painted decoration of the mansion, i.e. its frescoes and wooden decorated structures (ceilings, traditional cupboards, doors), which dates to 1798. The painted decoration is dominated by purely decorative motifs with “cartouche”, bouquets and fruitbaskets, and also cities and architectural structures, animal representations, themes of lore and symbolism. The decoration of the Tsiatsiapa mansion attests the wealth and cosmopolitan character of its owners and fits into the artistic style known as “Eastern Rococo”. The completion of the restoration and conservation works revealed new and interesting elements about the monument, highlighted its aesthetic and historic value, and can also contribute to the research of the secular painting during the 18th century.
στις Αυγούστου 30, 2021