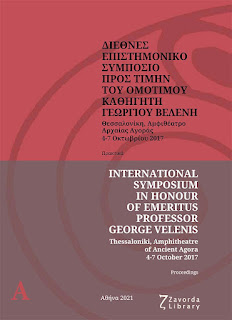 Σαρρηγιαννίδου Χαρά,
«Οι τοιχογραφίες της φάσης του 18ου αιώνα (1753) στο ναό του Αγίου Νικολάου Κρεπενής στην Καστοριά», Διεθνές επιστημονικό συμπόσιο προς τιμήν του ομότιμου καθηγητή Γεωργίου Βελένη. Πρακτικά, σ. 377-393.
Αθήνα 2021
PDF
Λέξεις κλειδιά: Καστοριά, Τέχνη, Τοιχογραφίες, Άγιος Νικόλαος Κρεπενής, 18ος αιώνας
Keywords: Kastoria, Art, Wall-painting, Saint Nicholaos Krepenis, 18th century
Summary
Chara Sarigiannidou, The Wall Paintings of the 18th-Century Phase (1753) in the Church of Agios Nikolaos of Krepeni in Kastoria
The church of Agios Nikolaos in the village of Krepeni is located on the east side of Lake Kastoria, south of Mavrochori. It is a single-nave church with a wooden roof. It originally had a narthex whose western wall has been dilapidated, while its two long walls are not preserved in their original length. Inside, most of the mural paintings of the nave and a small part of the decoration of the narthex, where at least two phases can be identified, are intact. According to the inscriptions that attest the founding of the church, the oldest surviving wall paintings date back to 1650, while the later ones can be dated in 1753. The purpose of the article is to present the paintings of the renovation phase of the 18th century exploring the social and artistic circumstances of the area of Kastoria. The wall paintings of this phase did not affect the previous decoration in the parts where they were preserved. They occupy the east and the north wall of the nave, with the exception of a small section of the latter, where the previous decoration is preserved. The iconographic program of the wall paintings of the second phase complies with the standard program of the single-nave churches in an orderly manner and with proper arrangement of the decoration. It includes, in addition to the Eucharistic performances in the sanctuary, scenes from the Christological cycle, the Passion and the Eothina. There are also numerous depictions of saints in full length and medallions with busts of saints. The painting belongs to the so-called last phase of hagiography after the conquest of Constantinople and is part of the rich painting tradition of Western Macedonia and Epirus of the 18th century. In particular, the article focuses on the investigation of iconography and examines the aesthetic and artistic trends of the anonymous painter while it provides equivalent examples in the city of Kastoria and its vicinity.
στις Αυγούστου 30, 2021