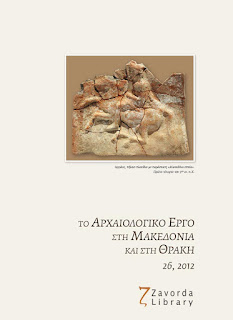 Σαρρηγιαννίδου Αμαλία,
«Νέα ευρήματα στο ναό του Αγίου Νικολάου του Τζώτζα στην Καστοριά, στο πλαίσιο υλοποίησης έργου ενταγμένου στο "Ε.Π. Μακεδονία- Θράκη 2007-2013" του ΕΣΠΑ», ΑΕΜΘ 26 (2012), σ. 35-40.
Θεσσαλονίκη 2017
PDF
Summary
Chara Sarrigiannidou, New findings in the church of Agios Nikolaos tou Tzotza in Kastoria during the implementation of a project integrated to the “Regional Operational Programme Macedonia-Thrace 2007-2013” NSRF
The church of Agios Nikolaos tou Tzotza is located in the north part of Kastoria in the Apozari parish. In the church can be identified at least two phases with certainty. The church was built during the second half of the 14th century as a small single-cell timber-roof basilica, with a saddleback roof and a semicircular apse. In a later phase, dating to the late post-Byzantine era, the nave was extended to the south and west, where a narthex was added. Exploratory trenches were opened during the restoration works of the church under the supervision of the 16th Ephorate of Byzantine Antiquities, after the integration of the project “Restoration of the church of Agios Nikolaos tou Tzotza in Kastoria” to the “Operation-al Programme Macedonia-Thrace 2007-2013” NSRF Western Macedonia. In the years 2011 and 2012 those woks revealed new interesting facts about the diachronic use of this sacred place. Two walls were discovered in the nave, the west wall and part of the south wall, preserved at the foundation level and belong to the same Palaiologan phase as the east and north walls of the nave. Part of the decorative zone of the church was revealed on the north wall, outside the limits of the church of the Palaiologan period. Its limited preservation renders any conclusions regarding its dating tentative. Also during the works, an unexpected finding was also revealed, embedded in the second step at the interior of the narthex. This was part of the stone architrave of an iconostasis with dimensions 0.77 × 0.19 m. and height 0.9 m. It dates to the Middle Byzantine era and possibly to the 11th century, as the technical construction and especially the decorative motifs constitute part of the artistic tradition of that period. Furthermore, research revealed two primary and one secondary burial inside the nave, the dating of which is difficult. However, the burials possibly date to the early post-Byzantine times as emerges from the pottery collected.
στις Αυγούστου 30, 2021