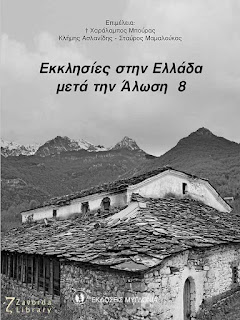 Ώττα Καλλινίκη,
«Ο ναός του Αγίου Γεωργίου στη Σιάτιστα», στο: Εκκλησίες στην Ελλάδα μετά την Άλωση 8, σ. 361-374.
Θεσσαλονίκη 2021
PDF
Summary
The Church of Agios Georgios, a monument unknown in the bibliography, is located at the eastern side of Chora, in the mountainous settlement of Siatista. The settlement flourished in the 17th and 18th century and is known for its mansions of this period. It possesses numerous post-Byzantine churches. Agios Georgios is a three-aisled timber-roofed basilica. The core of the building includes the naos and the sanctuary and measures about 14,50 m x 19,60 m externally, not counting the apse of the bema. It is divided into a nave and two aisles (following the ratio 1:2:1) defined by two colonnades, each consisting of six wooden columns and one wooden pilaster located behind the templon screen. There is no narthex. An arcaded portico extends on the west and south sides above which the gynaekonitis is extended. The latter is continued, based on the ground, on the north side, forming a Π-shaped plan. The apse of the bema, semicircular in plan, protrudes from the east wall, while the apses of the prothesis and the diakonikon are integrated in the thickness of the same wall. The entrance into the main church is achieved through a low doorway positioned on the west wall. Two small staircases, formed in the thickness of the north and south wall of the main church, offer access to the gynaekonitis. An independent access from the exterior is found on the level of the gynaekonitis through a low doorway on the north side, where the ground reaches higher. The gynaekonitis is lit by three windows on the south and three windows on the west wall. The main church receives light from five windows on the south wall, two on the east and two on the west wall. The church is covered with a saddleback roof, truncated on the west end. The gynaekonitis is covered with an independent single-pitched roof on the south and west sides and the extension of the main roof on the north side. The church possesses a wooden templon with pediments and other neoclassical features, similar to the templon of the church of Agios Minas (1852) in Thessaloniki. In the interior, wall paintings with figures of the Saints decorate the south and the north wall and the west side pillars of gynaekonitis. Wall paintings exist in the apses of the prothesis and diakonikon. The view from gynaekonitis to the main church is filtered with wooden trellises, called ‘kafasota’, that cover the intervals between the pillars, a feature often used in the gynaekonitis of churches in Macedonia in the period of Ottoman Occupation.
The church of Agios Georgios follows an innovative trend that flourished in the 19th century and altered the type of the three-aisled basilica. The latter dominated in Greece during the last period of Ottoman Occupation. The main characteristic of the new variation is the addition of an arcaded portico, on top of which the gynaekonitis is extended. The whole is incorporated in the core of the building augmenting the overall size of the church. The creation of the variation must be connected with the privileges brought in the Ottoman Empire by the «Tanzimat» reforms. It is found in various solutions regarding characteristics as the shape of the portico (linear placed on the west side, L or Π-shaped, extending to the south or both other sides), the position of the staircases leading to gynaekonitis, the kind of supports of the portico (piers or columns), etc. It originally appeared in the islands of Eastern Aegean. One of the first examples is the church of Panagia (1815) in Agiasos of Lesvos. In the same period, radical interventions were performed on post-Byzantine basilicas, aimed at adapting the older buildings to the new style. The variation of the type was spread in the Southern Balkans and Asia Minor.
The erection of the church of Agios Georgios should be dated around the middle of the 19th century, when the variation of the type presents numerous examples in the occupied by the Ottomans Macedonia, reflecting national aspirations for liberation. The above mentioned church of Agios Minas in Thessaloniki, erected in 1852, is an influential example of the type. The church of Agios Georgios in Eratira (Selitsa), a settlement close to Siatista, is erected in 1844 following the same type with a Π-shaped portico.
The external appearance of the church of Agios Georgios is simple. The walls are undecorated. The main morphological element which derives from the typology of the building is the arcaded portico of the south and west sides. The church is built with rubble limestone masonry interrupted by horizontal timber reinforcements, the same building technique found in houses of the same period. At the corners of the building and the doorjambs cut sandstones are used.
The church of Agios Georgios in Siatista is an interesting monument, added to the long catalogue of three-aisled basilicas with arcaded portico and incorporated gynaekonitis on top, in the Southern Balkans. Its further study will contribute to the research of Siatista’s 19th century history.
στις Νοεμβρίου 23, 2021