Ćirić Jasmina S., “Writing in Light”: Same as Different at the West Façade of St. Sophia Church in Ohrid 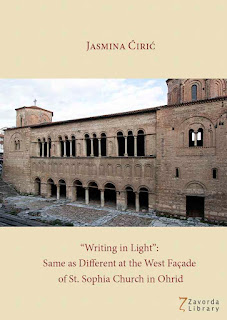 Ćirić Jasmina S.,
«“Writing in Light”: Same as Different at the West Façade of St. Sophia Church in Ohrid», International Conference: Serbian Language – Literature – Art – Art History, Faculty of Philology and Arts, p. 295-304.
Kragujevac 2013
PDF
Summary
The aim of this paper is to show (un)appropriate usage of photography in studies dedicated to Late Byzantine architecture. Since Late Byzantine architecture most of all expressed its intermediary nature on the surfaces of the walls, on the example of west facade of church St. Sophia in Ohrid (Macedonia) it will be shown how the quality and framing of the photography determines what and how we see. Several preserved sepia filtered photos of the church St. Sophia in Ohrid photographed by Viennese photographer Joseph Szekely 1863th will be juxtaposed to modern photo DSLR formats. One of the focused problems is framing of visual discourses since brickwork variety of west facade of Ohrid cathedral yields to be seen and captured. Although frames are deciphered by recognizing who or what is actually depicted, framing is constrained by the fact that it was photographed only what photographers and researchers previously recognized as same or different.
στις Νοεμβρίου 22, 2021