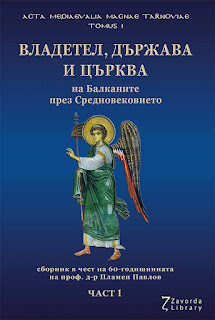 Атанасовски Александар,
«Кој, кога и зошто го поставил св. Климент Охридски за епископ?», Владител, държава и църква на балканите през средновековието, Сборник с доклади от международна научна конференция, посветена на 60-годишнината на проф. д-р Пламен Павлов, с. 184-196.
Велико Търново 2020
PDF
Summary
Researchers of the life and work of St. Clement of Ohrid generally agree that he spent the last stage of his life as a “Slavic bishop”. We aim to answer three questions related to his episcopal activity, namely: when, why and by whom was St. Clement of Ohrid appointed as a Bishop. It should be noted that there are differing views in historiography with respect to the three questions. The reason for this lies in the vagueness of the sources relied on by the researchers. These are in the greatest part the Lives of Cyril and Methodius, Clement and Naum. More extensive are the Lives of Clement, authored by the Archbishops of Ohrid Theophylactus and Chomatenus two or three centuries after the death of St. Clement, amidst entirely novel historical circumstances and relations. There are mainly three theses that have been put forward concerning the appointment of St. Clement – namely, that this was done by the Bulgarian ruler Simeon, by the Roman Pope or by St. Methodius. In continuation, we explore the arguments of each point of view.
στις Ιανουαρίου 07, 2022