Spasovska Nikolina, The Painting Studio of John Theorianos and the Images of the Monks And Hymnographers in St. Sophia – Ohrid 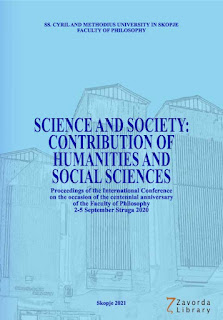 Spasovska Nikolina,
«The Painting Studio of John Theorianos and the Images of the Monks And Hymnographers in St. Sophia – Ohrid», Science And Society: Contribution Of Humanities And Social Sciences, p. 251-273.
Skopje 2021
PDF
Summary
This paper is an attempt to further increase existing knowledge about the painting program of the narthex floor of the Cathedral Church St Sophia in Ohrid, a work created by one of the most significant painting studios of the middle of the 14th century in the territory of present- day Macedonia. Under commission of Archbishop Nicholas, John Theorianos, the coordinator and the most advanced painter of the above-mentioned work shop, and his collaborators carried out the fresco arrangement of this holy space between 1346 and 1350, and he left his signature1 on an angel’s sword in the scene of David's repentance. In this regard and in absence of inscriptions, this paper aims to identify in particular one monk and four hymnographers, depicted on the northern part of the eastern wall of this sacred space. For that purpose, examples from both byzantine miniature and monumental painting will be explicated, analysing the peculiar iconographic features of the respective saints, as well as the pattern of arrangements and the mutual interrelation between them in several churches. Moreover, the paper shall seek to elucidate their correlation with the depiction of John Damascene poetry related to the composition of Holy Virgin's Dormition, which is fragmentally preserved in the blind dome above the narthex.
στις Ιανουαρίου 21, 2022