Vesevska Irena Teodora, Between East and West: Christian bishops from the territory of the Republic of Macedonia in historical sources 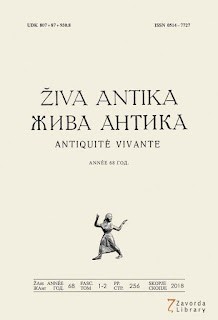 Vesevska Irena Teodora,
«Between East and West: Christian bishops from the territory of the Republico of Macedonia in historical sources», Antiquité vivante 68 (2018), p. 183-198.
Skopje 2018
PDF
Summary
The geographical position, strategic role and political significance of Macedonian territory within the prefecture of Illyricum were main factors in the struggle to establish dominant authority over the region in social, cultural and religious aspect. This is most noticeable in the rivalry for supremacy in church law and policy, which also meant influence over every other factors in the empire. The collision between the church and political interests of Rome and Constantinople was thus a central historical characteristic of the Late Antique period and a permanent feature of the Balkan region. Holding primacy over the territory of Illyricum became a major challenge for the clergy of Rome and Constantinople.
στις Ιανουαρίου 07, 2022